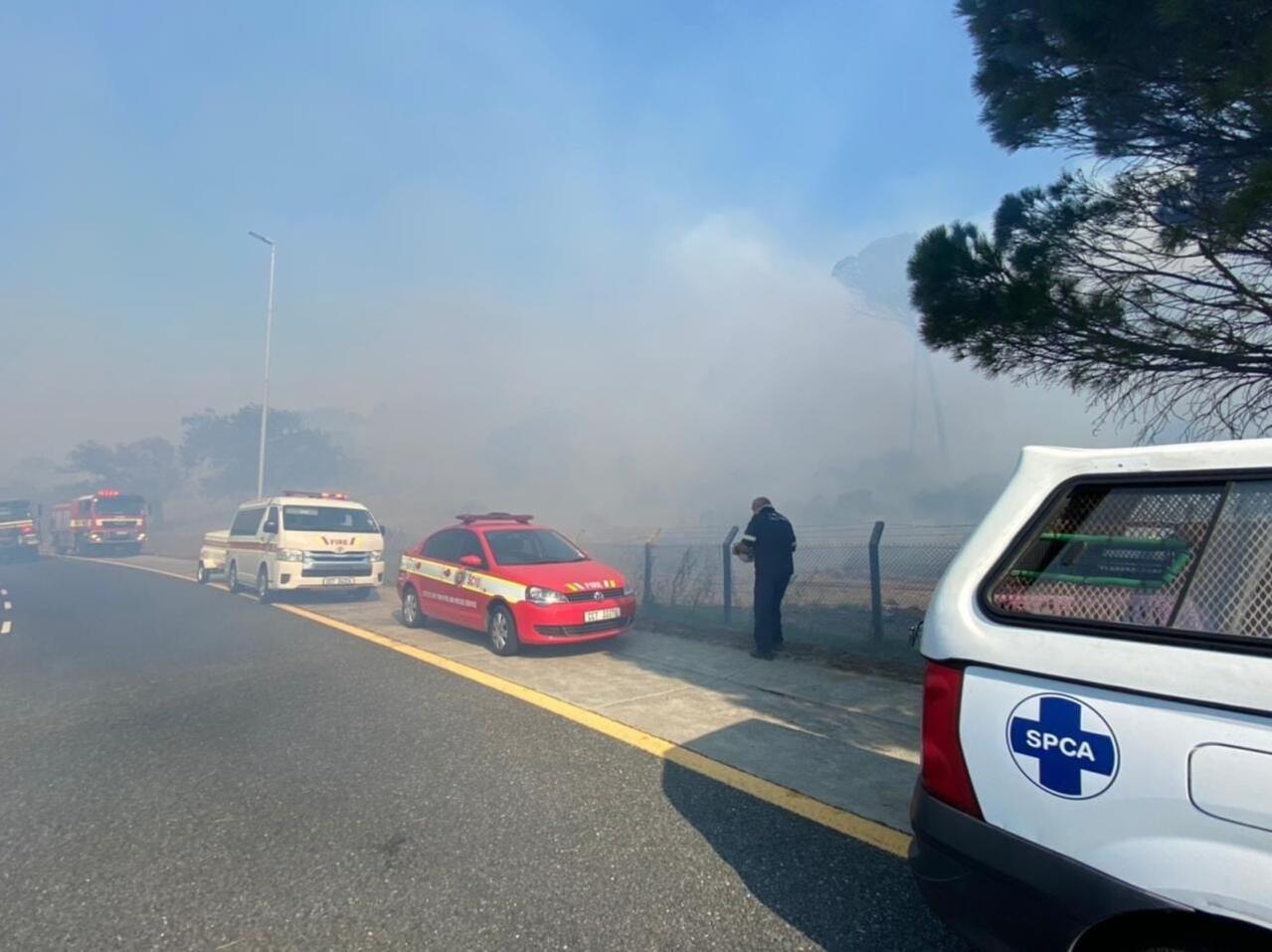 The SPCA were on site to assist animals affected by the devastating fire in the Table Mountain National Park.

Animal welfare organisations and a private dog daycare facility are co-ordinating their efforts to ensure the welfare of animals affected by the devastating blaze that started on Sunday April 18.

As the fire raged through the Table Mountain National Park, SPCA inspectors were on-site and while it has been too dangerous to enter the area, they are monitoring the periphery for any animals fleeing the flames.

SPCA spokesperson Belinda Abraham said as soon as it was safe to do so, they would be combing the fire ravaged areas for any injured animals “which will be brought back to our short-term wildlife care facility for treatment.”

In an update on Monday she said: “(There are) no animal patients yet. We are still unable to enter the areas (but) remain on high alert on the periphery.”

Meanwhile, the SPCA, PDSA and AtFrits Dog Hotel were preparing to take in any animals in need of a safe sanctuary resulting from the evacuation, she added.

Ms Abraham said they would need donations of dressings, bandages, Silbecor ointment, cool packs, fresh fruit and vegetables for the animals and supplies like energy drinks, energy bars and eye drops for the team in the field.

The Table View, Welgemoed, Cape Gate, Gardens, Constantia and Cavendish Square branches of Absolute Pets are acting as drop-off points for the donations.

Ms Abraham asked that those living in the areas close to the site of the fire, place shallow plastic containers with water in their gardens for the animals who will be thirsty.

If you come across an injured animal and it is safe to do so, place the animal in a covered cardboard box to minimise stress and call the SPCA on 083 326 1604

lana barnett
09:49 21 Jul 21
I met Sally Shaw in 2020 when I approached Chas... Everitt estate agency in Newlands to sell my family home in Orchard Street. It is a 60 year old house in need of TLC, and Sally was the consumate professional: positive, encouraging, going the extra mile, never intrusive and simply such an incredibly charming and kind person, who never gave up. The result was that we sold the house within 10 days. She held my hand along the way, as newly widowed,I found the process quite traumatic. I remember Sally very fondly and if ever anybody needs an estate agent, I would not hesitate for a minute to recommend Sall Shawread more

George Amoils
13:59 20 Jul 21
Sally is just an absolute pleasure to work with.... She fully understands all parties and makes it an great experience for all. If you looking for an agent in the Claremont Upper , Newlands & Bishopscourt area you cannot do any better than Sally. She is a shining star iread more

Sandra Allen
16:29 15 Feb 21
I had a wonderful experience selling my home with... Sally. She worked closely with me every step of the way. She went out of her way to show every suitable client my home as soon as possible. Everything went smoothly, and I highly recommend Sally as a highly professional Estate Agent.read more

antoinette morkel
22:05 08 Feb 21
So much effort, patience and dedication went into... selling our home. I add an additional 5 stars for a wonderful team. Thank you Lynne!🌹read more

David Roux
20:53 08 Feb 21
Sally is an absolute professional and a pleasure... to work with. Trustworthy and caring. She is setting a high standard for customer service in the real estate industry. Highly recommended.read more

Nina Innes
13:25 04 Feb 21
Sally Shaw worked tirelessly in a professional... and caring way to help us sell our house. Her attention to detail, love of her profession, sincerity and commitment are rare to find. She genuinely loves people and wants to get the best for all parties involved in the purchase and sale of a new home. I cannot recommend her highly enough.read more

Melanie Black
11:58 11 Oct 19
Sally Shaw is a professional, warm & welcoming... personality. One couldn’t wish for a more solid, down to earth, friendly person to deal with when embarking on a property deal. A breath of fresh air in a very competitive industry. You can count on an enjoyable experience in your house hunting endeavors with Sally.read more
See All Reviews

Shannon Ebrahim
04:35 09 Feb 21
Lynne Crosland is a truly excellent and... professional real estate agent who one immediately feels comfortable with and trusts. Lynne knows alot about the real estate market in Cape Town and goes out of her way to find exactly what you want. Highly recommend her services!read more

Brigitte Jenkinson
20:38 08 Feb 21
Lynne Crosland has been the most amazing rental... agent (as a rule agents are not my best)and has assisted me over the past couple of years with a couple of our Newlands properties. She is kind, but firm, very organised, extremely professional and when it comes to her work she is second to NONE!. Lynne has guided me through some very tricky situations and has given me some very wise counsel with a couple of our tenants .I would not want another agent handling our properties except for Lynne and Sally. I highly recommend this team! Thank you Lynne for being the most awesome Newlands AGENT! This is in Afrikaans of which mine is very swak so my reply is in English.read more

Thalia Craven
19:27 08 Feb 21
I have dealt with Chas Everitt for a couple of... lets over the past few years and have always been 100 % satisfied. Lynne Crosland is charming, professional and listens to my needs, bringing in the type of tenant that is respectful and a pleasure to rent to. I would highly recommend this company and Lynne to anyone.read more

Teresa Snyman
06:50 29 Jan 21
I have the privilege of working alongside this... special lady as a colleague, a friend and a trusted "go to" girl. Her standards, ethics and all round caring personality is an asset to us all.read more

Sally Shaw
08:29 15 Oct 19
Lynne and I have been partners in the relocation... business for the past 12 years and have now joined forces to sell property in Newlands, Cape Town. We both live in the area and are passionate about property. Lynne prides herself in outstanding service and all our customers love her.read more
See All Reviews