Cause of Great Westerford Fire Under Investigation 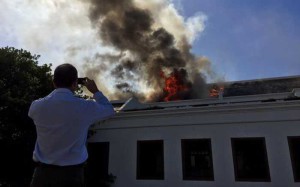 The cause of a fire that broke out in an office block on Newlands Main Road is under investigation.

Hundreds of staff members working in the Great Westerford building evacuated the property after a fire broke out on the top floor.

As a precaution, about 1,000 pupils and staff were evacuated from Westerford High School, which is next door to Great Westerford.

According to the school’s receptionist, pupils and teachers had noticed smoke rising from the third floor of office building.

Newlands Main Road, on which both properties stand, was temporarily closed off as firefighters fought the flames.

Hundreds of staff members based in the Great Westerford building were evacuated and took refuge at Newlands Brewery nearby.

Newlands Brewery’s general manager, John Stenslunde said hundreds of people gathered on a sports field at his place of work.

By 12:30 the staff members had left the brewery field.

According to eNCA reporter Bibi-Aisha Wadvalla, the cause of the fire is unknown, but could be due to an electrical fault.

Staff would only gain access once safety had been confirmed by a structural engineer, she said.